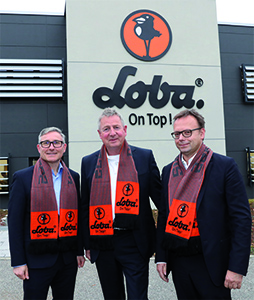 Ditzingen, 29 October 2018. Adhesives manufacturer Wakol GmbH is increasing its share in LOBA GmbH & Co. KG, one of the world’s leading manufacturers of surface treatments, and now holds a majority stake in the company. As Wakol has been majority-owned by ARDEX since 2015, LOBA will thus become part of the international ARDEX Group. To facilitate this transaction, four long-standing LOBA shareholders have put their shares up for sale. The overriding goal of this decision is to safeguard the company’s long-term success. Therefore, the new shareholder structure consists of Wakol GmbH and Michael Fischer, who will remain as Managing Partner.

“By linking LOBA with Wakol, we have managed to provide our company with an extremely sustainable perspective and pave the way for my succession early on. The international operations of the ARDEX Group offer excellent opportunities to continue growing and to lead LOBA into a successful future”, says Managing Partner Michael Fischer about the new structure. “I am most delighted that our shareholders unanimously supported this step and that we have been able to win such substantial partners for LOBA”.

Christian Groß, Wakol shareholder and CEO, sees the strengthening and expansion of the existing cooperation as a common goal: “LOBA and Wakol have been working together excellently for over 20 years and we are now able to reinforce this even further. I am convinced that the ARDEX Group offers great opportunities for both companies, whilst at the same time preserving the values and culture of a family business”.

Mark Eslamlooy, CEO of the ARDEX Group, has also expressed his pleasure over the partnership: “The cooperation with LOBA provides us with an optimal constellation to further expand our competence in the field of flooring systems and surface finishings. The LOBA brand enjoys a distinguished reputation and stands for technical competence, premium products and outstanding service. The strong international orientation and the extremely high level of commitment of the people involved have convinced us that LOBA is the ideal partner for us”.

Ditzingen site to be expanded – company will remain independent

LOBA's Ditzingen site will be further expanded as a development and production center for surface finishing within the ARDEX Group. The treatment and finishing of wood and cork currently play a key role for LOBA. Additionally, the company is expanding its activities in finishing resilient floor coverings as well as cementitious surfaces.

The company name, brand and sales structure remain unchanged as well as the contact persons for customers and suppliers. In both companies, the organization and personnel will remain the same. Following a mandatory review by the antitrust authorities, the transaction is expected to be completed at the latest by the end of November 2018.

Wakol GmbH develops, produces and very successfully sells laying materials, industrial adhesives and sealing compounds. It has stood for premium quality and customer accessibility for over 80 years. The ARDEX Group has been the majority shareholder of this family-owned company since 2015. Over 185 people are employed at the headquarters in Pirmasens; worldwide, the Wakol Group employs around 230 people. Besides Germany, Austria, Switzerland, North America and the Netherlands are amongst the most important sales markets. There are further intensive activities in Poland, Italy and Great Britain, to name a few. Wakol is also actively involved in global exports.

Founded in 1922, the finishing and care of parquet and hardwood floors have been the core business of the company based in Ditzingen near Stuttgart for almost 100 years. LOBA also owns subsidiaries in Brazil and China, as well as joint ventures with Wakol in Poland and North America. The LOBA Group currently employs around 120 people, 97 of whom work at the Ditzingen site. Technical excellence, top-quality products and the extremely well-focused customer orientation are the key factors for the success of the LOBA brand in over 60 countries.

ARDEX GmbH is one of the world’s market leaders in high-quality chemical building products. As a family-owned company, the company has maintained a sustainable growth course for over 65 years. Today, the ARDEX Group employs more than 3,000 people and is represented in over 100 countries on all continents, boasting a virtually end-to-end presence in its core market of Europe. With more than ten major brands, including Wakol, ARDEX generates total turnover of over EUR 770m worldwide.

In order to give you a better service this Website uses cookies. By continuing to browse the site you are agreeing to our use of cookies.